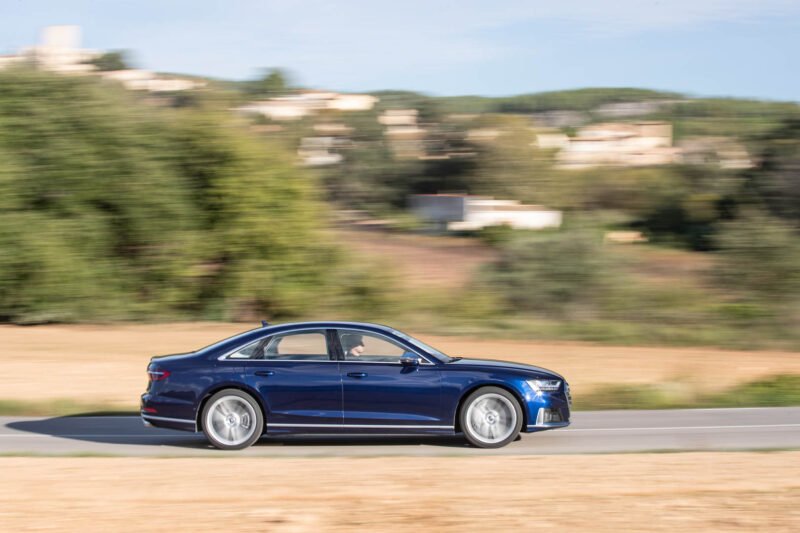 On paper, the new Audi S8 might seem a bit underwhelming when compared to its competitors. For instance, its 4.0 liter twin-turbocharged V8 makes 563 horsepower and 590 lb-ft of torque, while its two main competitors — the Mercedes-AMG S63 and BMW M760Li — have over 600 horsepower. However, the Audi S8 is far quicker than we expected it to be.

In this new test from Carwow, host Mat Watson times the acceleration of the Audi S8; both 0-60 mph and quarter-mile times; to see how quick it actually is. While the S8 isn’t the most powerful car in its class, it’s absolutely among the fastest. In Watson’s testing, he recorded a 0-60 mph time of just 3.2 seconds for the S8, which is faster than the 3.4 seconds of the AMG S63 and 3.5 seconds of the BMW M760Li. So despite having less power, it’s actually faster.

Even more impressive than that was its quarter-mile time. While running the quarter-mile isn’t something any Audi S8 owners are going to do, knowing that it can run an 11.52 time makes for awesome bragging rights. That’s also faster than the S63 (11.6 seconds), with less power. The idea of a massive luxury sedan, with an enormous back seat and more luxury than anyone could ever need, can run a sub-12-second quarter-mile time from the factory is hilarious.

Though, having said that, it’s also a more sedate driving experience than the S63 AMG. The Audi S8 is seriously impressive, it even handles remarkably well, but it’s a serene, luxurious experience, even when you’re pushing it. Which is fine, considering the sort of car that it is, but if you want serene and luxurious, the standard Audi A8 will probably do you fine. If you want some luxury and some fury as well, the S63 might be better suited to your needs.

However, if you want to go very, very fast and not have your passengers spill their expensive lattes while doing it, it’s hard to beat the new Audi S8.

The post VIDEO: Carwow Tests the 2020 Audi S8 — Faster Than You Think appeared first on QuattroDaily.