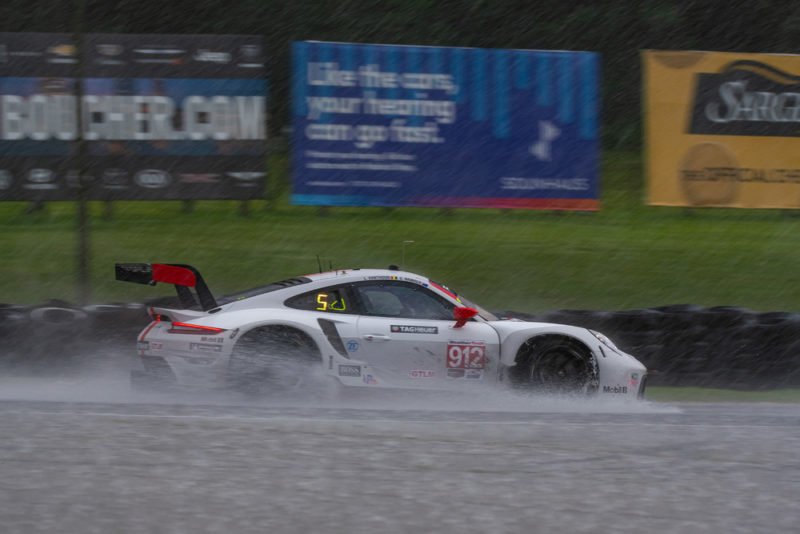 Things did not exactly go to plan for Porsche this weekend in Wisconsin. The team showed up in a great place to score some great points and take over the lead of the championship. The #912 Porsche 911 RSR started the race from pole position and had an incredible 20-second lead on the field with just 50 minutes remaining in the 2 hours 40 minutes race. And then the Porsche team saw it all collapse around them in a surprise turn of events. Porsche had another chance at victory with the #911 racer, but that car crashed out on the final lap of the event. We can’t even imagine the heartbreak that these drivers feel after putting in such an incredible early race performance. But, I guess, that’s how the cookie crumbles, and why we run the race. The Porsche team has yet to find victory in the 2020 IMSA season after four rounds. 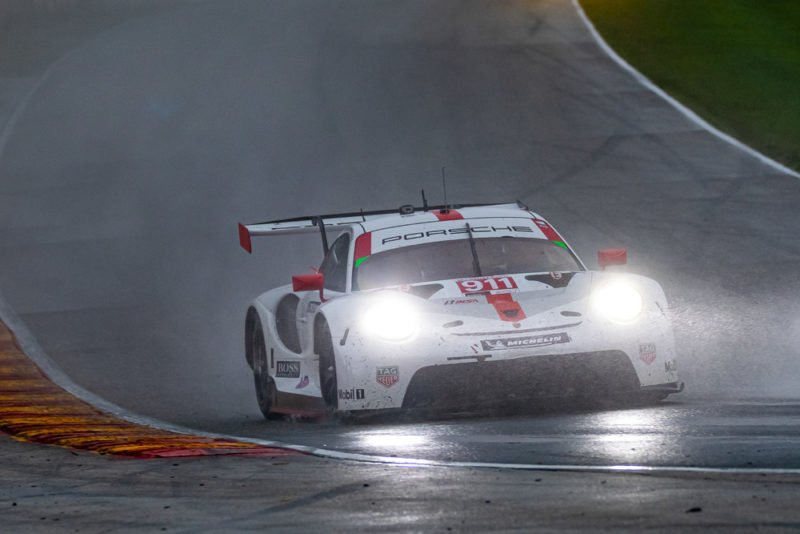 Let’s begin with the 912’s struggle. Laurens Vanthoor started the #Bamthor car from pole position after setting a new GTLM class lap record time in qualifying. At the start he lost the lead to one of the strong Corvettes, but 15 laps later he retook the lead and began stretching out a huge lead. As soon as his drive time was up he pulled in and handed off to Earl Bamber who extended that lead out to a mega 20 second gap. The team’s strategy looked great, but then the unpredictable Wisconsin weather set in and a torrential downpour flooded half of the track. The team tried to radio to Bamber to let him know he needed to come into the pits for a set of Michelin rain tires, but a glitch prevented the message from going through and he ran headlong into what could have been mistaken for Lake Michigan at the end of the main straight. With no grip from his slicks on the wet tarmac, Bamber skidded off the track at high speed, beaching himself in the gravel. Thankfully the car wasn’t damaged, but he needed a tow out to get back on track, which lost the car two laps, and the win.

Now let’s look at the #911 car. Fred Mako began the race from last place in the GTLM class on a very conservative strategy. Taking his time and conserving his tires on a hot summer day Mako managed to work his way up to third place and stayed out far longer than anyone else on that first stint, running 28 laps before stopping for tires. Nick Tandy took over control of the car in fourth position, though he dropped to fifth in short order. When the rain came down in buckets Tandy made his way trepedatiously around the track without changing to rain tires. When the sister car ended up in the sand, and the BMWs and Corvettes pitted for tires, Tandy stayed out to grab the lead before the race was red-flagged. 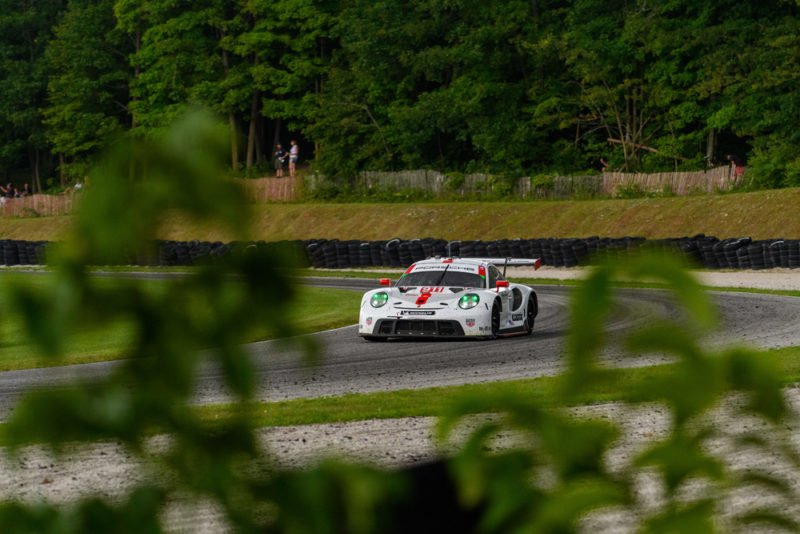 Porsche was hoping the race would end under caution, thus netting the team a win, but when it was announced that the race would return to green flag conditions the team pitted for rain tires and returned to the circuit in 3rd position. With just seven minutes remaining, IMSA unleashed a four-lap sprint to the flag on the GTLM class and Tandy did everything he could to work his way to the front. In a last-lap battle with the number 24 BMW, both cars went off at high speed and Tandy ended up stuck in the mud at the side of the track. 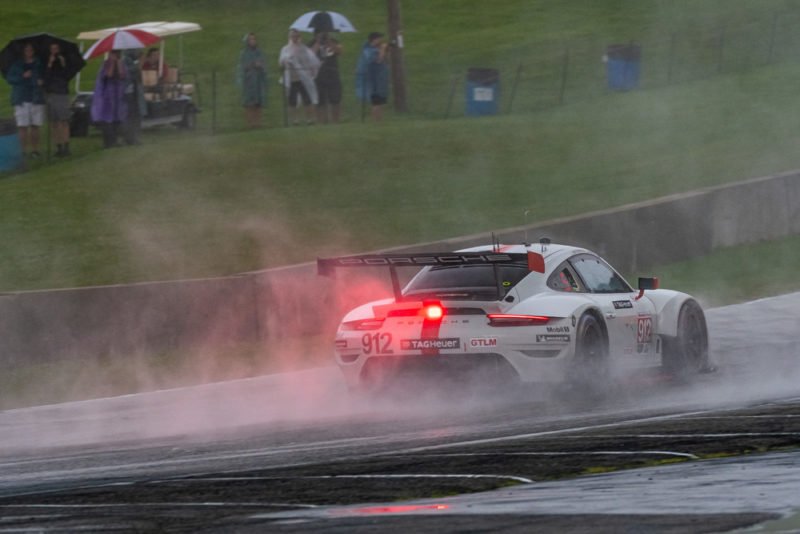 Porsche ended the race in fourth and fifth in the 6-car class. You could say it did not go well.

Steffen Höllwarth (Head of Operations IMSA Championship): “The result is very disappointing. We managed to set fast lap times over the distance, so the long runs in the practice sessions paid off. We were very well positioned and were able to steadily work our way forward in the race. The number 912 car was leading when the sky opened up. Rain, hail, lightning; we got the lot. We decided to pit a little late. When 912 came in, all chances of winning were scuttled. After the race interruption, the 911 had to pit briefly one more time to refuel and switch to wet tyres. In the last ten minutes, the race turned into a real thriller. Nick Tandy pulled out all stops. With two laps to the flag, he slid off the track in the extreme conditions and hit the barriers. Fortunately, nothing serious happened to him.”

Nick Tandy (Porsche 911 RSR #911): “We had another race where with a bit more luck we could have had a good result. In the end the conditions were too bad to keep racing. You see this when multiple cars have no chance to even control themselves on the straights. We lost all grip and aquaplaned off the road at high speed. Luckily, I’m okay and I’m very thankful to the team at Porsche Motorsport for building such strong cars.“

Laurens Vanthoor (Porsche 911 RSR #912): “The number 3 Corvette got a better start and was faster on the straights. I cleverly tucked in behind and conserved my tyres, because the car in front of me had attacked too hard – so I could pass it, take the lead during my stint and build a gap. What followed was a catastrophe. Earl didn’t get the radio message to come into the pits. He kept going on the dry track, got caught in the first downpour and lost the car.” 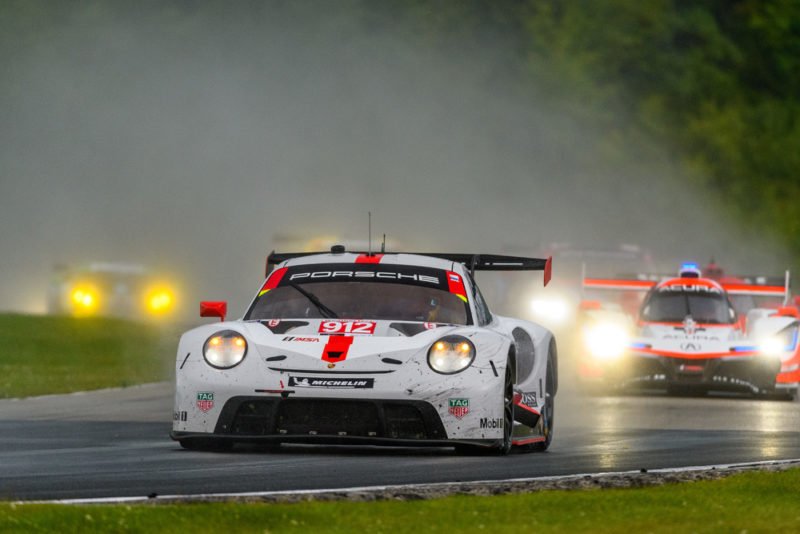 The post A Sudden Rain Storm Keeps Porsche From Victory At Road America IMSA Round appeared first on FLATSIXES.