We’ve had this old 1976 Porsche 912E kicking around the garage for about five years, and mostly we’ve just been enjoying the experience of driving it. It’s far from a perfect example with a little bit of rust and paint that doesn’t even look good from ten feet. It’s definitely a driver-grade classic and won’t ever be a show machine.

The car had been sitting for a decade or more before we took ownership, so it’s been a slow slog to update and rebuild the car mechanically. We sent the brake calipers off to be rebuilt by PMB Performance. We built a custom intake boot because the original rubber piece is unobtanium. We had the engine completely rebuilt to brand new spec. And because we’re suckers for a vintage aesthetic, we installed a set of minilite-style wheels and fresh “Classic Sprint” tires from Vredestein. The car’s suspension, particularly the front suspension, remains a major sticking point with the car.

Hmmmm, I don’t think the steering wheel is supposed to do that. And isn’t the tach supposed to work? We dropped our 912E off to @sportspurposegarage on our way to @radwoodofficial #RadwoodNorCal this weekend. Hopefully they can make it right again!

Ever since we purchased the car it’s had a steering shimmy that comes and goes. It’s not speed or RPM or heat or time related. With new tires the problem goes away for a few thousand miles, but as they wear in the front left sees more wear than the front right. We absolutely loved the Vredestein Classic Sprints, but because of the suspension issue the fronts were worn away far quicker than they should have been. 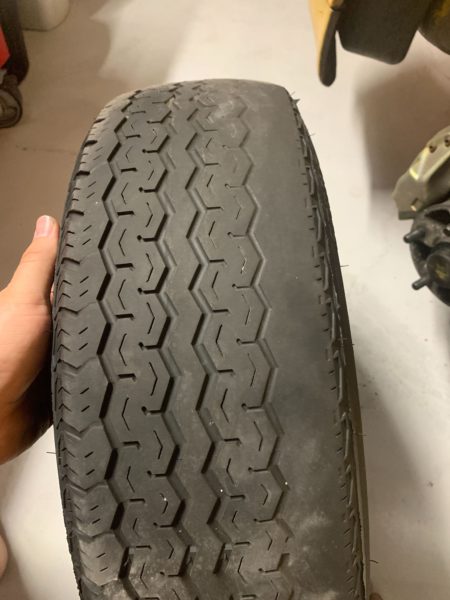 Vredestein was gracious enough to send us another set of these wonderful vintage-look tires, but before they go on, we have to get this situation under control else we risk throwing away another set in just a few thousand miles.

It’s important to note that before the wheels and tires went on, we did a preliminary round of suspension bit replacement. The original oil bath shock absorbers were replaced, along with a set of Turbo tie rods, and new ball joints. None of that fixed the shimmy. There were plenty of theories from a bunch of commenters on social media, including a worn out steering box or crash damage. A cursory inspection of the front suspension pan shows no buckling or previous repairs. There is a bit of rust in the front trunk, but it’s contained to the point where the hood meets the header panel and shouldn’t be considered structural. So, let’s dig everything out of the front suspension and see if it’s the steering box.

Is it remotely possible that these are the original fluid-bath shocks on my 170k mile 912E?

The front suspension of the 912E came out like spreading warm butter on bread. Three bolts up top attach the strut mount to the strut towers, three bolts at the front of the control arm, a couple at the back. Unbolt the tie rod end from the upright and a few wiggles with a pickle fork to pop it apart. Disconnect the brake line, disconnect the sway bar, and you’re all set. From rolling the car into the garage to getting the front suspension out of the car was only a few quick hours of work. 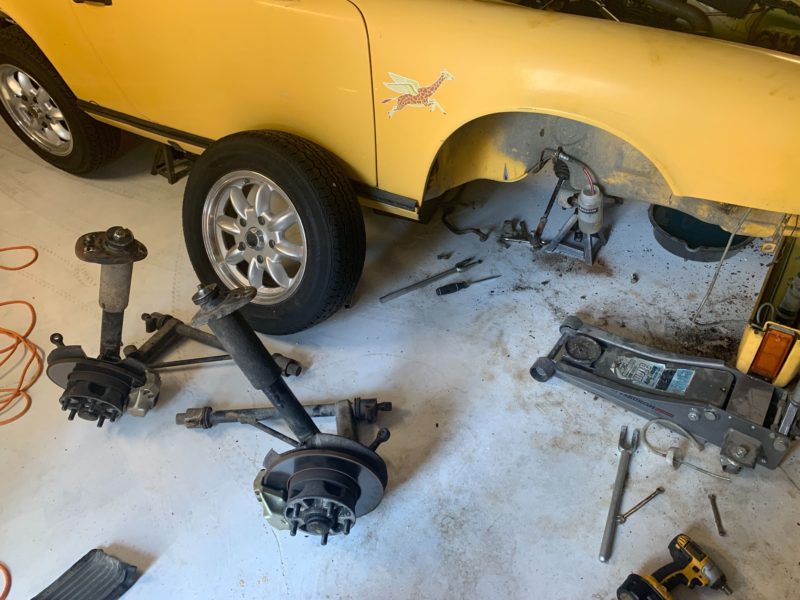 The steering box comes out even easier. Once the front subframe is unbolted, you can go inside the “smuggler’s box” compartment in the front trunk and unbolt the steering column bracket and pull the bolt in the pinch joint to disconnect the lower column from the upper column. Then give it a big yank and the steering is free. 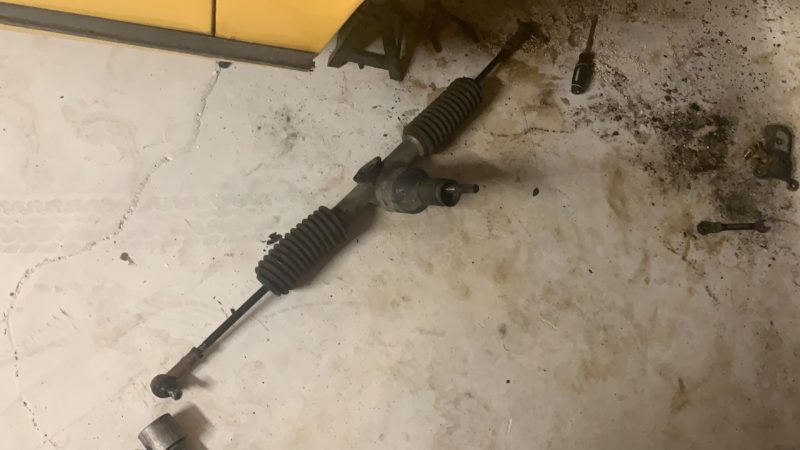 The box doesn’t appear to have any more play than normal, and feels like it’s basically brand new. It doesn’t even appear to have a worn out giubo, but while it’s out, we’ll replace it with a new one anyway. So, steering isn’t the issue. The only things left in our suspension system that isn’t brand new are the torsion bar bushings, wheel bearings, and upper strut mount bushings. So, let’s replace all of those while the suspension is out.

We figured that if we’re going to replace the suspension bushings, we may as well upgrade the torsion bars. And if you’re going to upgrade torsion bars at the front, you should probably do it at the back, as well. And since we’re replacing the rears, we’ve always wanted to lower the car an inch or so, and the easiest way to do that is with adjustable rear spring plates. And since we’re attacking the rear suspension, we may as well replace the rear sway bar. This 912E has all of the mounting points for a sway bar, but has never had one during our ownership of the car.

So, we pulled up the ECS Tuning and placed a huge order (you can check out our cart of 153 items right here), bought a used rear sway bar on eBay, and a set of Sway-A-Way torsion bars from Pelican Parts. As soon as all of that stuff lands on our door step, we’ll get it installed and tell you how it went.

Back to the wrenching…

Every single online tutorial says the torsion bars are incredibly easy to remove from their splined homes, but in my case that could not have been further from the truth. You’re supposed to be able to drive the torsion bar from the rear spring plate by drilling a hole in the end cap, popping it off, and applying some pressure with a drift pin and a hammer. At the front you should be able to wiggle the T-bar free from the control arm with ease, possibly persuading it with some vice grips and a pry bar. All four of my torsion bars seemed welded into place, I even purchased an air hammer to try to punch them free of where they were lodged. 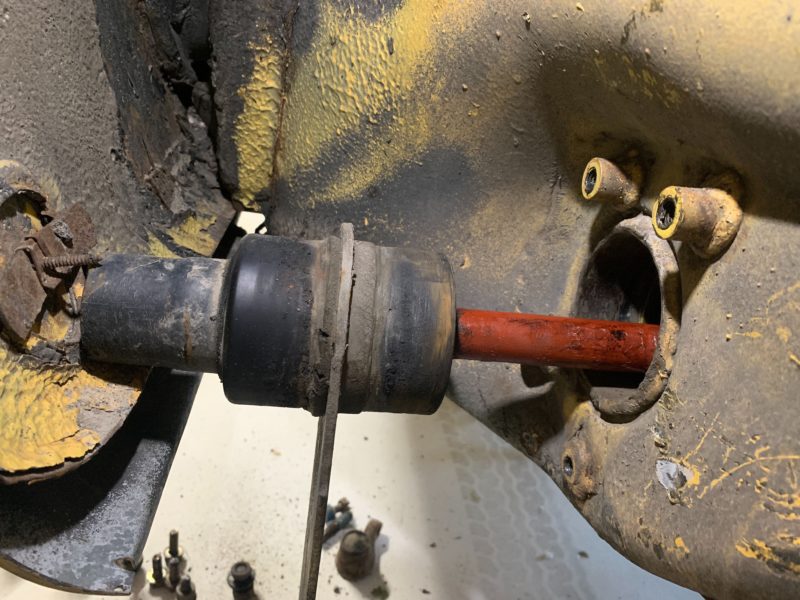 But, I could just barely get my cutoff wheel in there. So, a few sparks flew and the old torsion bar and spring plate came out in a flash. 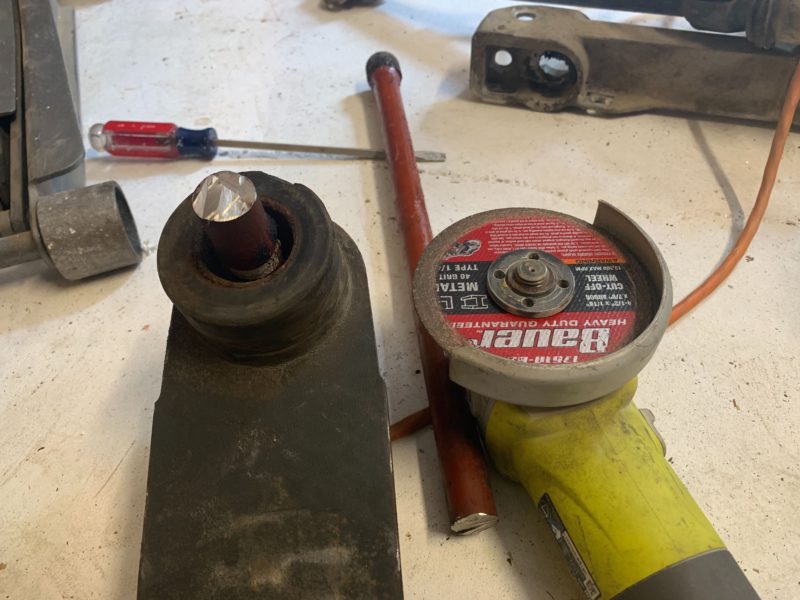 The front wasn’t so easy. Even with the control arm out of the car and held into a vice, I couldn’t get enough force on the end of the bar to push it free. I’ve disconnected the ball joints from the control arms and will be dropping them off at a nearby auto shop to have them use a bearing press to push the front torsion bars out. When the new ones go back in, I’ll be sure to use an extremely liberal coating of grease to make sure they don’t corrode together again. But, once these T-bars are in, I hope to god I never have to do this job again.

As usual, something that looks relatively easy is about as far from it as you can get. Working on old cars is never as easy as they make it look.

The post Our Porsche 912E Needs A Full Suspension Overhaul, But It Doesn’t All Go To Plan appeared first on FLATSIXES.