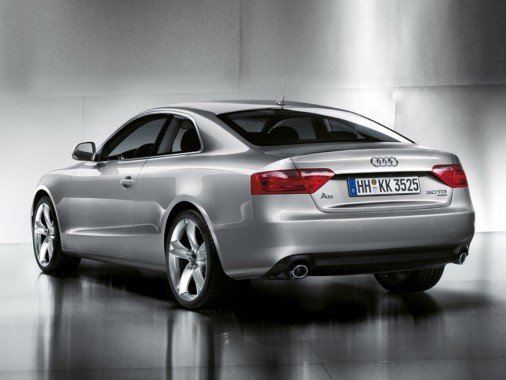 The Audi A5 3.0 TDI is not the most thrilling car in the world. It’s powered by a relatively ho-hum 3.0 liter V6 diesel engine that makes good enough power but also returns good fuel economy. It’s the engine you get if you want the great-looking B8 Audi A5 but also need the added fuel economy for commuting purposes. However, if you take your ho-hum A5 3.0 TDI to Darkside Developments, it becomes something entirely different.

In this new video from Jay Emm, we get to see a Misano Red Audi A5 3.0 TDI Coupe that’s been given some very serious performance and sound upgrades from Darkside Developments and it’s a much, much different car.

From the outside, it doesn’t look all that different, which is a good thing. Walter da Silva’s B8 A5 design is too perfect to mess with. It just gets new wheels and a lower ride height, thanks to its Bilstein suspension, which makes it look more menacing, but the overall design is unchanged.

Under the hood, Darkside Developments gave it a bigger turbo, ECU tune, new exhaust and more, allowing the 3.0 liter V6 diesel to make a whopping 395bhp and 580 lb-ft of torque. That’s a lot for a B8 Audi A5 Coupe, as that’s almost as much horsepower as the new RS5 but also far more torque.

More importantly, though, it actually sounds good. It’s incredibly hard to make a diesel engine sound good. Sure, it’s easy to make a diesel loud, that’s no problem at all, but to make it actually sound good? That’s difficult and Darkside has managed that. Admittedly, that might change, as the car is currently still under development and it blows a bit of black smoke out of the exhausts (American diesel truck enthusiasts would love it). Darkside says that won’t happen anymore after the tuning is finished, so it might lose a bit of that sound as well.

Still, this is a very cool way to make your relatively normal Audi A5 diesel a much more interesting daily driver.

The post VIDEO: This B8 Audi A5 TDI Makes Diesel Sound Good appeared first on QuattroDaily.