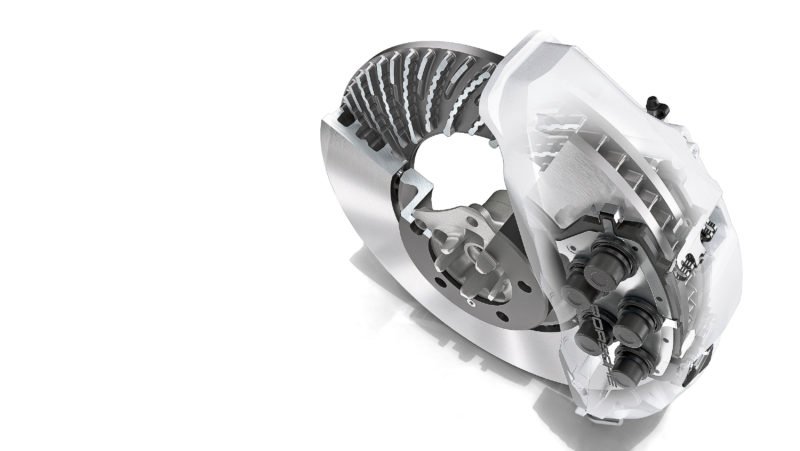 A tungsten coating on carbide rotors: another world first from Porsche. A mirror finish, better response, less fade, no rust, and 90% less brake dust than a typical iron rotor. This last advantage is illustrated by the bold choice of painting the Porsche Surface Coated Brakes (PSCB) calipers white—any brake dust would be obvious with this color. You have to admire the way Stuttgart subtly boasts.

The list goes on: stopping forces and thermal stability approaching those offered by a ceramic brake, but at only one-third the cost (see the footage below for the exact price of replacement). For many who need superlative braking performance but don’t necessarily need to spring for the outrageously expensive PCCB, PSCB might be the right compromise.

Typically, the more brake performance provided, the more dust and brake noise one must deal with. In addition to being unsightly, brake dust is usually very corrosive and can turn into the nearly-irremovable cementite which combined with water. Naturally, this is more than most users are willing to contend with—especially owners of the Cayenne, who likely prefer a more casual, hassle-free relationship with their SUV.

This low-maintenance lifestyle is one reason why Porsche decided to treat these rotors with high-velocity oxygen fuel. The mirror finish is another, and the added resilience—nearly half the fade of iron rotors—is a third. Additionally, a good brake system has the adequate hardness for wear resistance and deformation resistance. Tungsten carbide is more than 300 times harder than iron on the Vickers scale—a large part of why its used to coat bits meant for cutting glass.

A large part of the cost savings is dude to using a minimal amount of the featured material. To construct a disc made entirely from tungsten carbide would cost three times more than a PCCB, but only a thin layer is required. Porsche use a traditional gray-iron rotor and coat it with just 0.1mm (about the width of a human hair) of tungsten carbide, which supposedly wears at 30% the rate of a typical iron rotor.

The idea for a tungsten-coated disc has been mulled over for quite some time, but it’s only recently that it’s been feasible. Early attempts at bonding the traditional iron rotor with this coating proved unsuccessful. Recent development with Bosch/Buderus resulted in laser etching the rotor’s surface to provide structure, then galvanizing that interlayer area. Now able to adhere, the coating is applied via a high-velocity oxy-fuel spraying process, in which tungsten carbide particles are shot at the disc at supersonic speeds (more on this below). 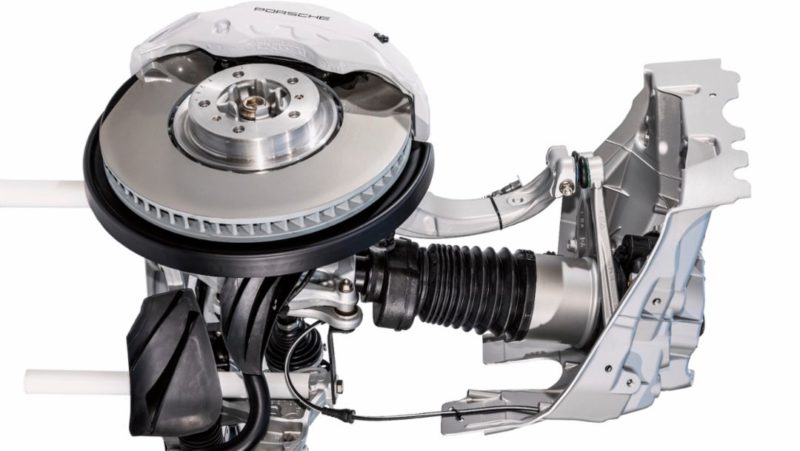 The compromises made are not significant, but they will impact the useful life of these brakes and the components with which they can mingle. Traditional ceramic and and semi-metallic pads don’t agree with this carbide coating, so a special blend was needed. The Akebono pads, made of undisclosed materials, have microscopic particles which penetrate the tungsten carbide coating. Unfortunately, these exceptionally hard and adhesive pads are not compatible with iron rotors. Therefore, once the 0.1mm layer of tungsten carbide is worn away, the user will notice a significant decrement in braking response and stopping power.

For a wonderfully detailed explanation of the processes at work and more enthusiasm than any non-engineer can muster, see Engineering Explained’s video on the subject below: