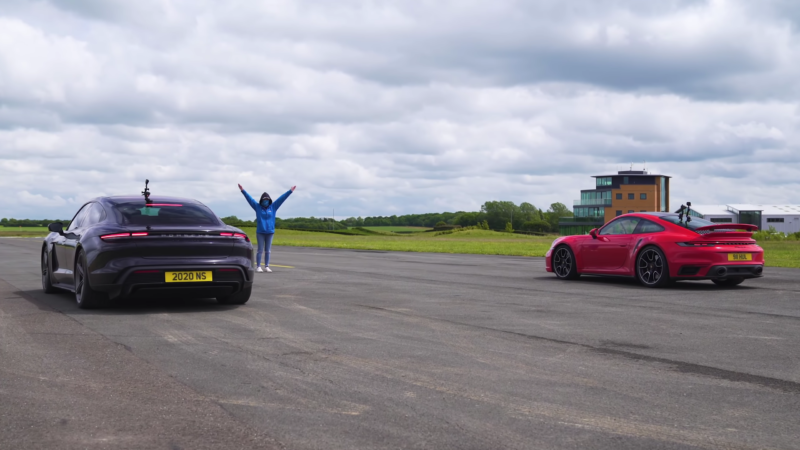 As the groundbreaking Taycan Turbo S has unofficially been declared as the world’s drag king, it’s only fair it’s stacked against one of the strongest members of the petroleum-powered opposition. Both cars are as powerful as they are heavy, and the stats supplied by Porsche places them in close competition. However, we’re all familiar with the conservative, lawsuit-avoidant numbers Porsche chooses to publish.

In the case of the electric revolutionary, there’s a little more weight and power to deal with. The 5,152-pound bruiser has 750 horsepower and 774 lb-ft of torque to push it around. It leaves the line and reaches 60 miles an hour in as little as 2.4 seconds, and forces its way down the drag strip to cross the line in 10.5 seconds. A comfortable, four-door, nearly silent techno sled which covers the quarter-mile in 10.5 seconds. The world’s gone topsy-turvy.

As both cars wear the same-sized wheels and tires—255/35R20; 315/30R21—presumably their footprint is comparable. The electric car does have a bit more forcing its four wheels into the asphalt, but the other vehicle is renowned for the way it can claw into the blacktop and pull the horizon nearer. 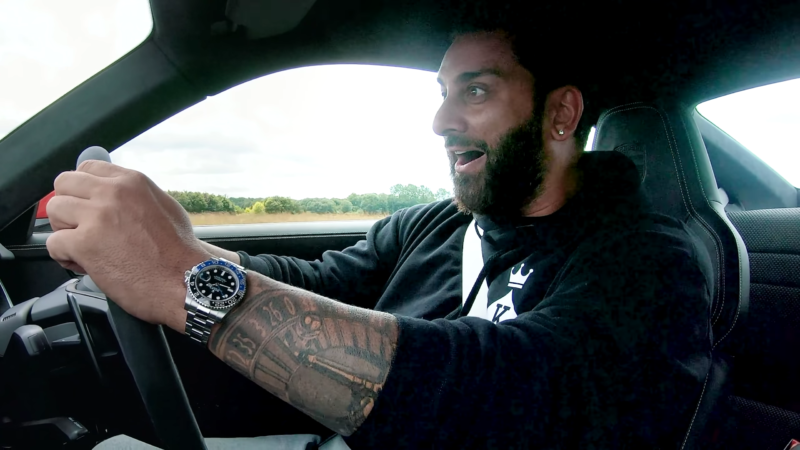 It takes something truly special to shock a supercar collector like Yanni.

Let’s contrast the Taycan’s stats against a member of the old guard. This one might still run on dinosaur bones, but it is infused with everything modern technology offers—nearly as much as the electric wunderkind.

Off the bat, the 911 (992) Turbo S will please the purists (and nomenclature-obsessed) because it lives up to its name. In this case, it actually uses a pair of turbochargers to force-feed its engine. The result is 640 horsepower and 590 lb-ft—the latter figure produced at scarcely believable 2,500 rpms. Though those figures pale in comparison to the Taycan’s, the 3,650-pound 911 looks svelte in electric company.

The result of these weights and outputs result in strikingly similar performance figures—the 911 is also supposed to clear the quarter-mile in 10.5 seconds. Despite the odd similarities, these two use very different powerplants, and as a result, deploy their power differently. The whole idea of instantaneous torque is redefined with the way the Taycan can summon its thrust, but the 911 has an ace or two up its sleeve. As we learn, there’s a lot more to winning a race than readily accessed torque.